What is a Die Handler?

Request a Quote for the Hansford Die Handler 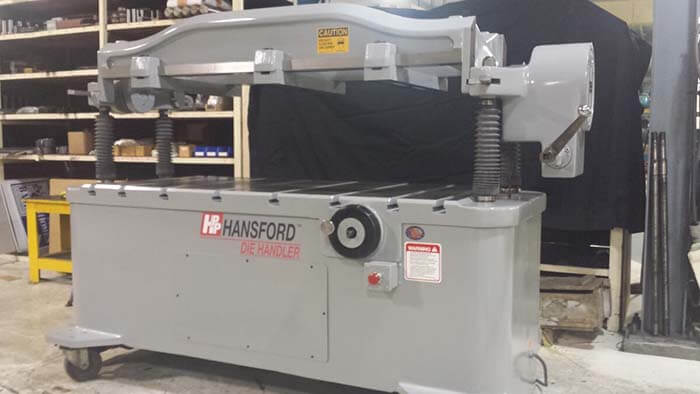 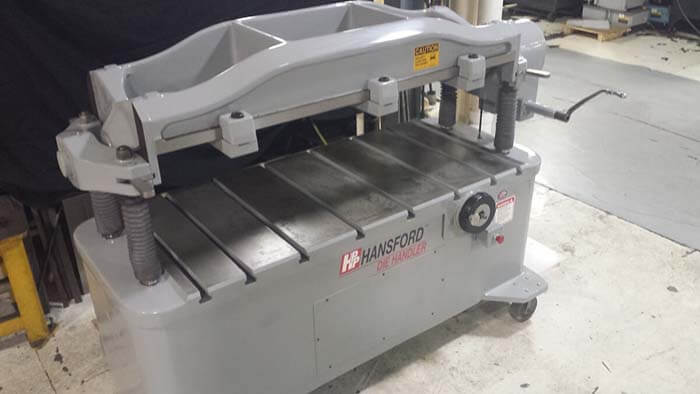 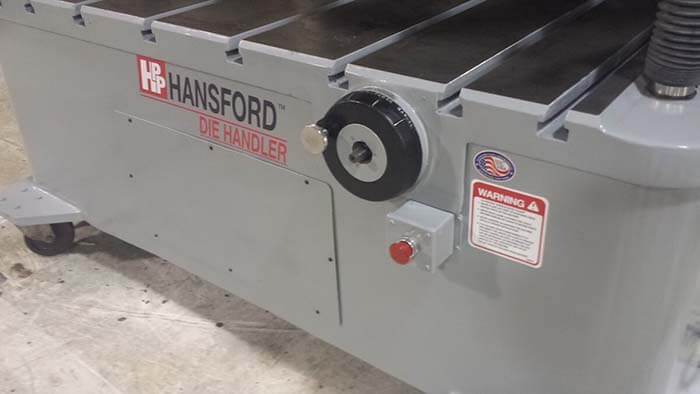 The top platen is supported on ground steel trunnions and is rotatable through 360°. It is moved vertically by four precision lead screws driven by alloy bronze nuts supported in precision ball bearings. Levers at each corner lock it rigidly and accurately in the 0° and 180° positions. The open construction of this platen gives maximum access to the top of the die set.

A special gear change dial provides the ultimate in safety and ease of operation. Three positions are provided:

Eliminate the hazards of slipping and jamming and increase your productivity by enabling one person to separate, service, and try-out valuable dies. Using chain hoists, lead mallets, and two or three toolmakers is not an efficient way to separate and service dies. Dies pulled from storage are usually separated and the punches, dies, and strippers are inspected before the die set is put in use.

If a die set has been in storage for several months, it may need relubrication. A die handler helps make die set inspection a fast and safe one-person operation.

The rugged, cast upper platen and lead screws utilized in Hansford Die Handlers assure a positive, smooth vertical movement and the ability to withstand the forces involved without deflecting beyond acceptable limits.

Today’s die sets are more complex and therefore, more care is needed to separate or close them without jamming. The rugged precision of the Hansford Die Handler eliminates problems of separation because the upper and lower platens are held parallel to each other within .003″ T.l.R., and ground locks are provided on all four corners of the upper platen.

All models have a rated try-out force which is exerted by hand crank in the “Try-Out” mode. This is a squeeze-type force, which allows some plants to shear in blanking dies. With a die separated and positioned, sharpening can be easily accomplished. Similarly, a forming die requires spotting in order to assure the proper match of the two halves, and this can be accomplished just as easily as shearing in or sharpening operations.

Tell us about your challenges, you’ll like our solutions. Model 1020 is no longer in active production; however, we will perform special runs for large scale orders. If you already have Model 1020 and are looking for maintenance, we are still happy to perform repair and rebuild services.